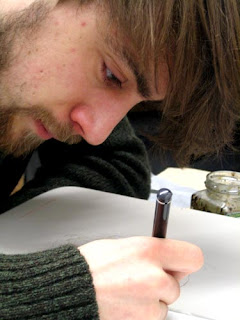 The print is a silent witness. Whether deliberate, as with a constructed print, or involuntary (a fingerprint, the impression left on a pillow in the morning), a print is always the tangible evidence left from a past action, now gone. It seems significant therefore that Ben Jeans Houghton's new edition of prints were germinated by a double absence. First of all, by his discovery of a discarded collection of illustrations (the author absent or gone), and secondly, by the subject matter of these illustrations: cadavers in the Newcastle University morgue (the body without the presence of self).

The atmospheric virtue of this series of prints doesn't just lie in the myth of their origins however, but in their sublime and delicate rendering. The Series begins as a literal, figurative transcription from the found illustrations and original cadavers which Jeans Houghton visited in the Morgue. Then with the idiosyncratic trepidation and wonder of an artist exploring his subject on the edge of discovery, Jeans Houghton's images become increasingly volatile. The recognisable, figurative human elements (simultaneously beautiful and horrible) rupture and destabalize as the images become permeated with the mists of the unknown, and the imaginary.

While the series begins as a witness to real death, these prints do not depict fear or explicit horror but instead they speak of a latent divine, and the corporeal, which exists at the border of ourselves, our imagination, and non-existence.