In 2007 Geordie Shepherd came over form Canada to create three works which are part of his 'Olic' series. Available now is his self publish book on his 'Olic People.' 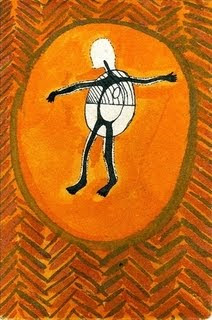 "Olic is an artistic and literary exploration of the Olic People, their life philosophy, world and times, written and drawn through the eyes and voice of a later-age cultural researcher."

In my final year of University I conceived of a drawing project based upon the voyage of characters based within a fictional culture. Inspired by my studies in anthropology, mythology, and sociology, I decided to create a handmade “ethnographic” tome. From this original text, my practice has continued to bridge gaps between narrative, fantasy, text and drawing, as exemplified by the Traveling Pottery Box, the Olic drawing series, numerous ceramic vessels and, most recently, The Traveling Boxes.

Olic (2010) is a written and illustrated 84-page book that is available from Lulu self-publishing press in three formats: Paperback, hardcover and e-book.